Were you planning on #adulting today? Well, not on Instagram you aren’t.

Banned hashtags and shadowbanning are the two new trending topics you need to discuss when planning content. By accidentally including banned hashtags in your posts, you might miss out on potential engagement, lose awareness for your brand, and perhaps even receive the notorious “shadowban.”

If you’ve been using banned hashtags, you could already be shadowbanned and not even know it. Scary, right?

But before we jump to conclusions, let’s break down this mysterious issue by diving into the realm of banned hashtags.

What are banned hashtags?

If you’ve ever had a hashtag not work, you may have encountered an Instagram banned hashtag. Instagram recently determined that any hashtag associated with inappropriate behavior will either be partially banned or completely banned.

In an interview with The Huffington Post, Nick Drewe, a social media analyst for The Data Pack, explained that “Instagram appears to have changed the way it censors hashtags now.”

“There are two levels of censorship,” Drewe said. “Hashtags can either have an outright block, and return no results, or a sort of ‘soft,’ often more temporary censorship with around 30 results.”

Instagram users have been clever by cheating the system and instead of using #adulting (which is partially banned) they will use #adultingishard (which is not banned...yet).

There is no way to know when Instagram is going to ban another hashtag, but once banished these hashtags won’t work on Instagram. When writing your content, make sure to steer clear of any hashtags that could be banned from Instagram.

If you have come across a hashtag that does not have a “Most Recent” section, then you’ve most likely found a partially banned hashtag. If users are posting offensive content associated with that hashtag, then Instagram will only show “Top Posts” with a limited range of content.

Instagram will also show you a disclaimer at the bottom of the results page with this:

“Recent posts from #adulting are currently hidden because the community has reported some content that may not meet Instagram’s community guidelines.” 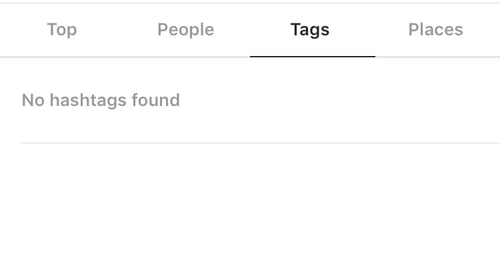 When you search a fully banned hashtag, it doesn’t even appear on the results page. It’s as if the word doesn’t even exist.

Wondering how to view blocked hashtags on Instagram? Well, you can’t. Fully banned hashtags are mostly words or phrases that have become so saturated with inappropriate content that they may never be viewable again.

How to determine if a hashtag is banned

The best way to see if a hashtag is banned is to search the hashtag on Instagram. When typing your hashtag into the search bar, check to see if it’s showing up or not. If results are not populating, then this means it’s completely blocked from the platform.

If the hashtag shows up in the search results, click on it and scroll down to the bottom of the posts. If there’s a message displayed at the bottom, then the hashtag has been partially blocked so users can see a limited number of posts Instagram has handpicked for that certain hashtag.

Instagram’s terms of service state that its team “review[s] these hashtags periodically and may make the hashtag searchable again if the content associated with particular hashtags changes over time.”

So it’s possible that banned hashtags could become unbanned eventually, if Instagram determines it’s no longer a threat to the user’s experience.

An Instagram shadowban involves banning a user's posts without their knowledge. From the perspective of the user everything is fine, but from the account of another user who doesn’t already follow them, it’s like they don’t exist.

If your account is shadowbanned and you decide to use hashtags, only you and your current followers will be able to see your post. When someone who does not follow you searches that same hashtag, they will not see your post in the results.

Because hashtags are one of the best ways to reach new followers, this is a serious issue for social media growth. It could mean a decline in likes, lagging engagement rate, or even a loss of followers. For Instagram Business, brands could lose out on potential customers, as well as future business, if their accounts are banned.

There are a few ways to reduce that chances that your account is shadowbanned. Here are the top 3 ways to avoid getting banned.

According to Instagram’s terms of service, “You must not create accounts with the Service through unauthorized means, including but not limited to, by using an automated device, script, bot, spider, crawler or scraper.”

If any of these are associated with your account, you could be flagged with the algorithm Instagram has in place to monitor these rules. If you decide to use a bot, Instagram will likely find out about it sooner or later.

If you are using the same hashtag over and over again, this will set off a trigger for Instagram. This tactic falls under spammy and inappropriate behavior Instagram is trying to avoid.

You might find this rule frustrating. Sometimes, you use hashtags repeatedly for organized campaigns and authentic content. But as long as you’re not using a bot and the hashtag is relevant to your content, you shouldn’t need to worry too much.

Banned hashtags on Instagram are a serious offense, and if you decide to use any, your account could become shadowbanned. Even if you only use one partially banned hashtag, Instagram will block your post from appearing on any of the hashtags you used.

The complete list of banned hashtags is fairly explicit. We’ll let you handle that Google search.

Instead of giving the entire list, here are some of the banned hashtags that are completely unexpected. You might be surprised to see some of the more popular hashtags, like “#humpday” and “#workflow.”

25 commonly used words you wouldn't expect to be banned:

Don’t get burned by the ban

Now that you have the tools and insight you need to avoid the ban, you can focus on creative copy and striking imagery to grow your audience.

Speaking of a healthy Instagram presence, have you heard what social media services LaneTerralever has to offer? Our team has the social savvy to help your brand meet its engagement and growth goals in 2018.

Scroll down to the form below and get in touch with us!