In PR there is a thin line between using sensationalism for building suspense and excitement, and the final product delivered. Last Sunday, millions of Americans were disappointed after tuning in to the Discovery Channel to view 27-year old Paul Rosolie get eaten whole by a giant anaconda.

Believe it or not this was not an intended public suicide, but rather an entertaining, controversial, and potentially grim PR stunt that may or may not have ended up being one of the biggest television letdowns this year.

Have you ever witnessed something so startling that you just couldn’t change the channel or look away? That’s the angle Discovery Channel was going for when they aired a plethora of action-filled ads featuring Rosolie dressed in an armored snake proof suit that protected his body from the usual fate that is associated with the prey of a giant anaconda.

The program was titled “Eaten Alive” and received a lot of backlash from animal activists protesting to keep the program off the air. Brand ambassadors for the show refuted the petitions positioning the program as an attempt to raise awareness about deforestation issues and wildlife in South America.

Despite the controversy, and whether viewers’ intentions were to protest it or witness it, millions prepared themselves on the couch to ogle one of the most shocking programs of 2014.

When the show aired, viewers spent nearly the entire program watching Rosolie and the team seek out the giant anaconda. The show ended with the daredevil backing out of the dinner party when safety became a concern.

The predictable failure of a man-made digestive scuba suit undoubtedly left many intrigued viewers disappointed. This will make future efforts for Discovery Channel’s brand managers more difficult when promoting shows as the trust from viewers has been damaged.

Even with the iffy reviews, the stunt definitely spiked the network’s viewership and has people talking: 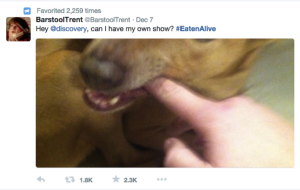 Some say that bad attention is worse than none. But heed this warning: sometimes overpromising can lead to major disappointment and a damaged audience trust. If you ever find yourself in a position to advertise a large scale event, be wary of promising outcomes that can’t be guaranteed.

How to Write a Press Release: Tips to Keep in Mind When Crafting