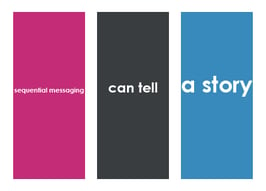 You open up your favorite website, noticing a banner on the side advertising boots. A few minutes later you see an ad by the same company, this time displaying sneakers. Later, you see one featuring dress shoes.

You have just been a target of sequential messaging.

What is sequential messaging?

In short, sequential messaging is intelligent retargeting. It’s choosing in real-time which ads will be the most effective to show to a given person at a given time.

The genius of it is that each ad can build on the last one, engrossing the viewer in a story. Information is available everywhere; the information that will win out is that which catches and holds the attention of the viewer.

Imagine: Before watching a video, a viewer sees a micro-episode of a commercial. When he or she clicks on to the next video, the next installment plays, carrying the viewer through the purchase cycle. The last micro-episode places a shiny CTA-button on the screen, taking the viewer to a landing page.

How does sequential messaging work?

Right now, it operates primarily in two ways: through cookies, and through manually changing the ads. Stored cookies can trigger specific ads and prevent already-seen ones from displaying. It’s a complex system, but it’s possible. Some companies have opted for a simpler route, releasing sequential ads over time – one week they run an ad, the next week a different message appears in the same spot.

These methods would work just fine if we were all still stuck on single screens. However, users are often jumping between several devices throughout a given day. In his Adweek article published last week, Garett Sloane notes, “Sequential messaging demands the most accurate identifying software, which is one of the reasons why the industry is shifting away from relying on cookie-based profiling on desktops toward a world where it tracks users with unique IDs as they log onto smartphones, tablets, gaming consoles and wearable computers.” Sequential messaging is about showing:
1. The right message
2. At the right time
3. For the right number of times.

What it means for marketers

In the coming year, sequential messaging will become increasingly popular. We don’t yet have the infrastructure for optimal targeting, but it’s coming. Companies will push for unique identifiers to keep track of their viewers.

What Does Live Streaming Mean for Marketers?

Maybe You Should Just "Suck Less, and Ask for More Reviews”?

Data and Analytics: A Breakdown on Reporting